You have probably heard that earthworms (nightcrawlers) and red wiggler worms are soil magicians, able to enrich the soil and create extra quality compost, respectively.

However, you have probably also wondered how to keep worms alive.

That is especially true if you have already tried culturing them and failed and are now unsure what went wrong and how to begin anew.

In this article, you will learn answers to the following questions:

To start our journey, crawl this way, please – and don’t neglect to open the recommended links too!

What’s the Difference Between Earthworms and Wiggler Worms?

Despite looking similar and being phylogenetic cousins, nightcrawlers and red wigglers are not the same species.

What is vital for the rest of the story is that nightcrawlers and wigglers have different needs, so to give them the best chances of surviving and thriving, we have to consider them separately.

Read More – Learn About the Best Worms for Your Garden and Their Differences!

What Do Worms Need to Survive?

Like all other creatures, to survive and thrive, worms require food, water (moisture), and shelter (cover). However, as said before, the specific needs of the two species vary.

Red wigglers are surface feeders that spend most of their time hidden in the litter or under some other cover at the soil surface, nibbling away at the decaying matter.

They tend to aggregate around food sources, and although not social, they don’t mind each other’s company. Spending time at the surface means that they adapt to the warmer temperature range.

All of these traits make them ideal for vermicompost bins.

In short, red wigglers need some shelter in the form of surface cover or mulch, food, and substrate – special bedding that is part shredded paper, part worm castings, or humus.

What’s the Best Bin Set Up for Red Wiggler Worms?

Red wigglers are nearly always kept in a closed system – a garden bed, or more frequently, a vermicompost bin.

You can find detailed instructions on how to make a worm bin on the EPA’s website.

Alternatively, you can consider shopping for ready-made vermicomposters – the designs are many!

What Earthworms Need to Survive?

Unlike the wigglers, nightcrawlers are burrowers and will bury themselves several feet into the ground.

One of the reasons nightcrawlers dig themselves in is that they are trying to escape the surface heat. Nightcrawlers prefer a cooler climate than wigglers.

As if that wasn’t enough, nightcrawlers are also solitary, so they require a lot more space than the gregarious wigglers.

When considering everything, it’s not hard to conclude that earthworms don’t do quite well in closed bins. They can survive and do their work in a compost bin for some time, but setting up a colony that won’t die off at some point is challenging!

In short, earthworms survive best in a naturally-kept garden with healthy, spongy soil.

Keeping and breeding them in a container is a story for another article.

The good news is that open compost piles will naturally host earthworms. Those earthworms will venture above into the compost pile from the garden soil below, aerating and enriching your compost on the way.

Compost piles can host both earthworms and red wigglers!

What to Feed Worms to Keep Them Alive

By this point, you are probably guessing that the nutritional needs of the two types of worms differ as well.

Your guess is correct!

Although, the difference is not so drastic. In theory, nightcrawlers can eat everything that the wigglers can eat – although they will munch it at a much slower pace.

What to Feed Red Wigglers?

Despite the idea that you can put just about any plant matter into a compost bin, the reality is a bit different, especially if you have a worm compost bin.

While we don’t know if they have taste buds, it’s sure that red wigglers have their food preferences; some foods may harm them or even kill them, so you have to be careful.

Let’s Start with What Not to Add to Your Worm Compost Bin:

I know that “never say never” is a popular thing to say, but please, never add meat or dairy to your vermicompost!

Unlike maggots, worms can’t handle dairy and meat. And not only will the animal food go smelly, but it will foster bacteria that can utterly annihilate your worm colony!

Now, off to the yummy stuff. Here are some food items your worms will likely appreciate!

What to Add to Your Worm Compost Bin?

Also, you can add cereal-based food such as oatmeal, cornmeal, bread, and plain pasta. However, I’m not a fan of adding lots of this stuff to the bin because it goes moldy easily – especially bread!

However, if your worms like cereal-based food and they are numerous, they can work with it in moderation and works great sprinkled as a supplement. Still, I prefer leaving cereal-based foods to mealworms.

Choosing the right compost ingredients to add is a bit of trial and error. If you see that worms have left a specific item after a few days and have eaten the rest, it means that they are not fond of that particular food. You may want to avoid it next time.

If you keep worms in a bin, make sure you cover their meals with bedding or paper and cardboard cover to minimize odors and avoid attracting insects such as flies and wasps or critters such as mice.

The good news is that when wiggler worms like their food, they have helluva appetites, eating up to half their weight in a day!

How to Feed Nightcrawlers?

In a garden setting, if you keep your soil healthy, mulched with green or brown mulch, and amend it with compost regularly, the nightcrawlers in your garden soil will have plenty to eat.

Leaving the autumn leaves on the ground will also help the nightcrawlers have a steady food supply during the cooler months.

If you are still curious or want to experiment with keeping and breeding nightcrawlers in a contained manner, know that worm farmers often feed them chicken mash, cornmeal, or plain crushed oatmeal, misted with water upon sprinkling it on top of the worm substrate.

How to Keep Worms Alive? – One More Tip!

The most important take-away message is that keeping worms alive and using them in your garden and your compost is not such a big deal after all!

You have to consider the individual needs of each type of worm and follow a few critical principles outlined above.

I wish your garden plants a lot of homemade, nutrient-rich worm castings!

If you have questions about how to keep worms alive – please let us know in the comments below! 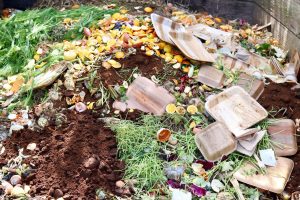 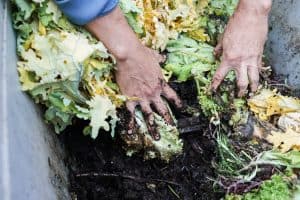 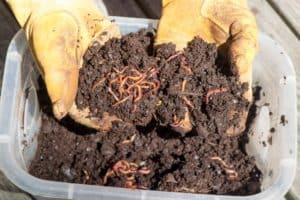 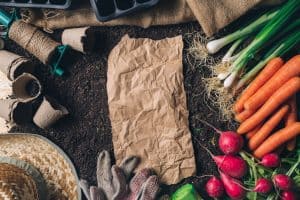 An environmental analyst, gardener, insect enthusiast, and a mom of three, trying to pour her life-long naturalist experience into useful articles. She is passionate about protecting biodiversity, achieving harmony with natural ecosystems, and raising kids conscious of - and conscientious about - our shared environment.
Subscribe
Login
0 Comments
Inline Feedback
View all comments