Summer in the USA is just around the corner, and that means a number of things. It means long, lazy sunsets under the warm buzz of insects. (Or the blaring roar of ten thousand cicadas – watch out, East Coast!)

It means summer sports or summer camp for the little ones, and college-aged kids coming back to intern from home. It means Fourth of July, warm, outdoor barbecues, and – when we’re on the topic of food – the best of all, pickles!

If you’re from an urban setting, maybe you feel like pickles are something that come from magic jars in the supermarket or deli.

Those weird, warty green things that look like a zucchini with acne. Pickles are just cucumbers soaked in brine; it’s really that easy!

And here’s the best news: to grow your own cucumbers, and make your own pickles, you don’t have to live on a ten-acre farm!

Gardening is possible in just about any setting – even from apartment balconies. All you need to grow cucumbers is a trellis, and you can even grow them hydroponically.

Hydrofarm GCTB2 Heavy Duty Tomato Barrel with 4' Tower, Green
$48.99 $41.60
Amazon
We may earn a commission if you make a purchase, at no additional cost to you.

Thinking that making your own at-home cucumber garden just might be feasible?

Then let’s review a couple of common questions about growing these bizarre green fruits.

Are Pickling Cucumbers the Same as Regular Cucumbers?

While any cucumbers can be pickled, there is a difference. Certain varieties work better for pickling.

Later in this article, we’ll look at which!.

Are Pickles or Cucumbers Healthier?

We’re supposed to avoid processed food, right? And pickles are nothing more than processed (“pickled”) cucumbers.

Keeping that in mind, it might surprise you to learn that pickles are actually the healthier option!

The processing of pickles (at least by the “saltwater” method; see below) introduces good bacteria, which consume sugars, add nutrients, and aid our gut health.

Similar to how yogurt is healthier than whole milk, the pickling process actually adds nutritional value to cucumbers.

Do You Peel Cucumbers for Pickles?

Before soaking in vinegar or brine, cut off the blossom end (the end opposite the stem), as it contains an enzyme that’ll make your pickles into mush!

Why Are My Homemade Pickles Mushy?

You probably didn’t cut off the blossom end! (See above…)

What Does a “Burpless Cucumber” Mean?

Let’s end with a fun one. If you’ve ever browsed the nursery’s seed aisle, you’ve probably seen “burpless” cucumbers.

What exactly does that mean?

Cucumbers normally contain a compound (cucurbitacin) that can cause mild stomach upset (and burping) in susceptible people. “Burpless” cucumbers have a lower amount of this chemical.

At least one scientific study has verified that burpless cucumbers DO reduce burping (even if they’re not actually “burpless”).

The Best Cucumbers for Pickling

The National Pickling Cucumber earns its grandiose moniker as one of the United States’ favorites for pickling – developed by the University of Michigan in 1929.

They can also be picked at a younger stage of growth (about 2in or 5cm) to make gherkins.

Bush Pickle Cucumbers are an excellent choice if you’re in want of space, and aren’t able to set up a trellis (or that hydroponic setup we talked about!).

The Boston Pickling Cucumber is an heirloom variety, that, as the name implies, is exce… [More] – Price: $3.95 – Buy Now 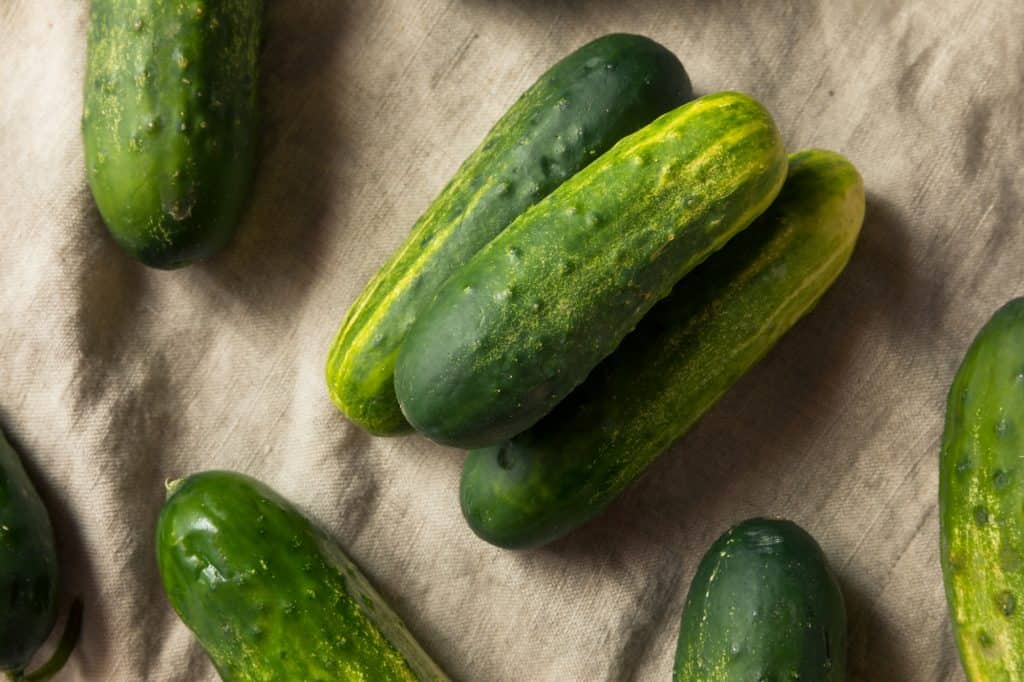 As the name suggests, this cucumber has a grand flavor!

The Regal cucumber plant produces fruits from 2-4 inches (5-10cm) long – and it produces a fair number of them, from an early start until well into the season. The fruits take 48-52 days to mature.

These cucumbers are smaller (about 3 inches, or 7.5cm), but mature quickly (~50 days) and are good – once pickled – for packaging.

For both varieties, they need support from a trellis.

I’ve Planted My Cucumbers… How Do I Pickle? 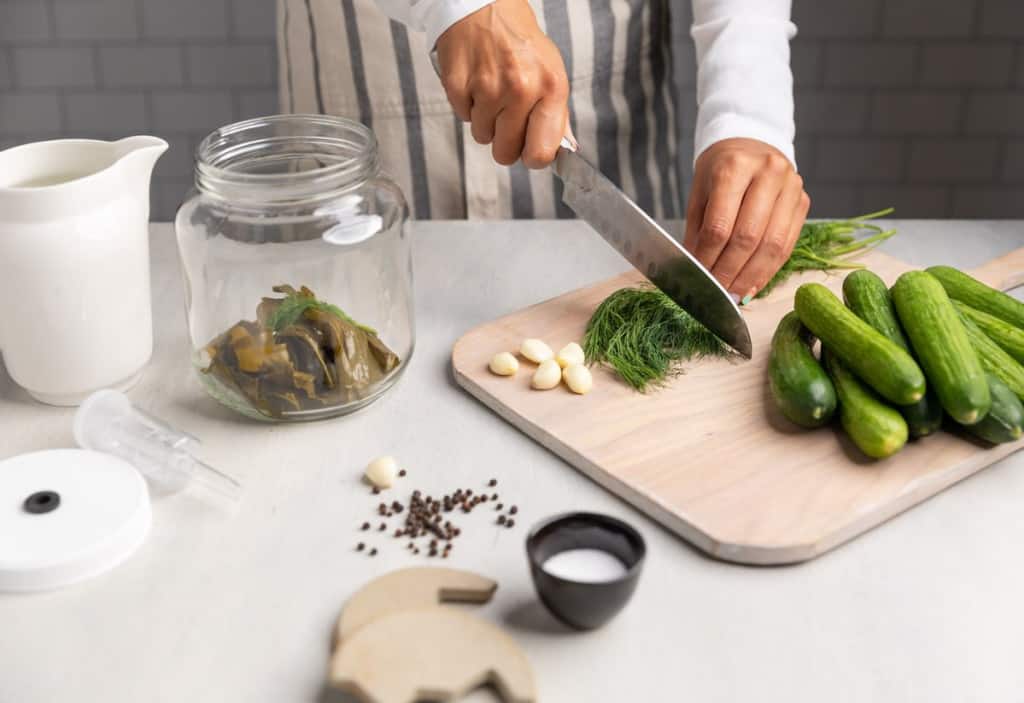 So you’ve got your little garden.

You’ve got your cucumber plants.

You’ve waited a month and a half, and they’ve started to produce – for many cultivars, perhaps five or ten at a time!

How to take the bounty that nature has given you and turn it into that most delectable of summer treats?

Pickling is a chemical process that’s been around for thousands of years. It’s one of the oldest methods of food preservation.

To preserve foods by pickling, the food is brought to a level of acidity that remains palatable but isn’t conducive to the growth of microbes (a pH between 2 and 4.5).

This requires an acid, which can be produced in several ways: by using vinegar (like Mrs. Wages’ Pickling Vinegar) or by fermenting the veggies in saltwater.

The two methods of making brine take different amounts of time and produce different-tasting pickles – so let’s go over the pros and cons of each!

How to Pickle Cucumbers in a Vinegar Brine

Pickling cucumbers in vinegar is the faster way to do it.

Follow these simple steps to produce tasty pickles in less than 24 hours:

How to Pickle Cucumbers in Saltwater Brine

This is the older method of pickling, and, unlike vinegar pickling, it involves fermentation.

The science is simple.

The cucumbers soak in saltwater, tightly sealed, where lactobacillus bacteria start to eat the sugars and produce lactic acid. This lactic acid is absorbed into the cucumber and sufficiently increases its acidity.

While slower, this method is incredibly simple.

Ferment Works offers an awesome “Mastering Fermented Vegetables” online course which includes videos, recipes, and a certificate once you finish your course. Check it out here: Here are some starter recipes to help you on your way!

Can You Reuse Old “Pickle Juice”?

Pickling depends on the water/acid ratios, which change after some solution is absorbed by the cucumbers, so the second time around, it won’t be quite right.

But you can reuse the brine to make “refrigerator pickles”.

These are made by leaving cucumbers in the fridge in old pickle juice. They aren’t pickled properly, and don’t store longer than a month or two in the fridge – but they can taste good!

Get Out and Try Pickling for Yourself!

So that’s pickling: a process that has been around for thousands of years, and exists in some form in almost every culture’s cuisine on this planet.

If you like pickles, don’t spend an arm and a leg to buy them from the deli. Grow your own, and make them yourself in your own kitchen.

And blow your friends’ minds this Fourth of July!

Looking for a book or starter kit to make pickling your own cucumbers easier?

Here are our favorites for helping you on your way: