Wondering which zero turn mower to buy? Here’s my review of Cub Cadet Ultima ZT1 54 vs Troy Bilt 54. Both are 24HP, 54″ cut but there are some differences between the two.

Scroll down to see the features of Cub Cadet vs. Troy Bilt. I’ve added a table of contents and a comparison table below to make it super easy to see which suits you best. For me, there’s a clear winner which I’ve listed below.

Both zero turn mowers are of excellent build quality. Both are manufactured in the US, a huge plus in my books. Power is pretty much the same at 24HP and 725cc (724 for the Z54). Both feature the EZT 2200 Hydro-Gear transmission.

There are some differences between the two mowers that could sway your decision to buy one over the other.

Let’s start with the Kohler engine in the Cub Cadet Ultima ZT1 54.

The Kohler 7000 series is described as “A V-Twin Beast for Backyard Warriors”. I particularly like that statement! Then, we move on to “Rule the Yard”.

This engine is engineered and assembled in the USA, tick. Its build quality is excellent and made to last, based on Kohler’s Command PRO commercial engine designs.

You’ve got “Consistent-Cut”, which makes sure you can consistently cut even tall, wet grass. Kohler’s “Smart-Choke” technology makes it easy to start, even in temperatures below freezing.

Briggs and Stratton doesn’t have any power statements for “backyard warriors” but simply states “Power and Performance”. Great! Made in the USA, tick.

These are Briggs’ features:

You can see all the specs inc stroke etc. on Briggs’ website.

Finance for Your Zero Turn Mower

Both Cub Cadet and Troy Bilt offer finance. Check out the website for each for full details but here’s a quick glance:

Which Zero Turn Mower to Buy

I just wanted to have a quick look at which accessories are available for each mower. Versatile equipment is the best on a homestead, so if you can hang a snowplow off it or add a mulching kit, all the better!

Check out the prices before you choose a zero turn mower though. The mulching kit is $10 cheaper for the Cub Cadet Ultima ZT1. 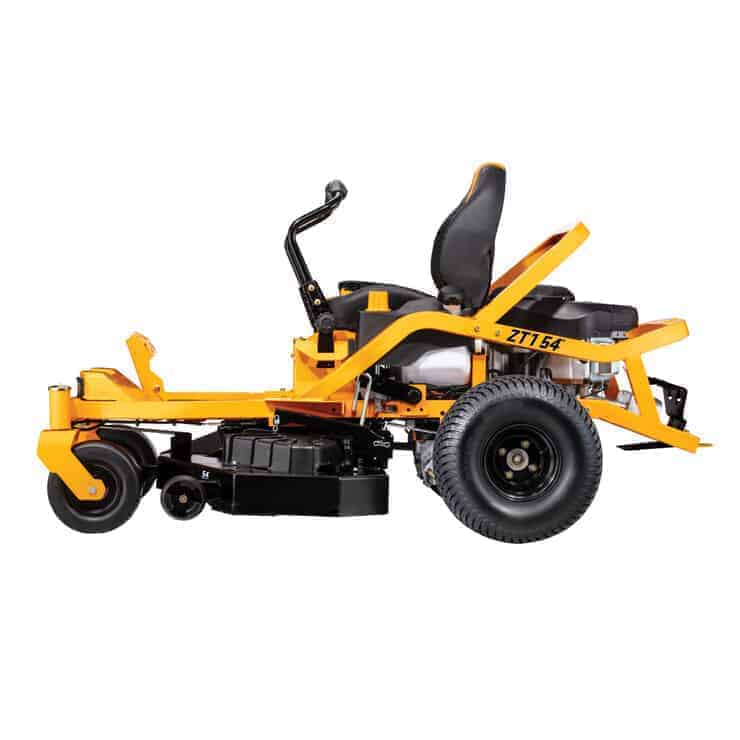 “Cub Cadet has made all the upgrades I used to complain about and then some. The frame and front spindles have been beefed up as well as the fabricated steel deck. The seat is great, they’ve added deck access from the top of the deck and headlights. Couple that with a terrific Kohler motor and you have the best bang for your buck mower.”

“I bought this mower to replace an older Cub Cadet 42” ZTR with a 17 HP engine and the transition was seamless. Crawling under my old mower to pop the belt back on is a thing of the past with the access panel!”

“Living out in the country and having the amount of land of we have and using a small riding mower to going to this awesome machine, why didn’t I get one sooner. Not only do you get to mow in half of time due to the 54″ blade which is also very easy to adjust with the ball level but you can go from slow to fast and wow is it fast and mows just as good with each speed.”