There’s an old saying that everyone knows that states, “You are what you eat”. While that is true in most instances, if you eat leaves that aren’t edible, or even toxic, you won’t immediately turn into a toxic person – just one with a very sore stomach.

So, how do you know what leaves are edible? Is it, for example, OK to eat the leaves of a potato plant? Are bay leaves edible? Could tucking into a few rhubarb leaves see you rushed off to hospital? We’re going to look at 30 common food plants and find out if you can eat their leaves as well as seeds, tubers, flowers, and fruits. 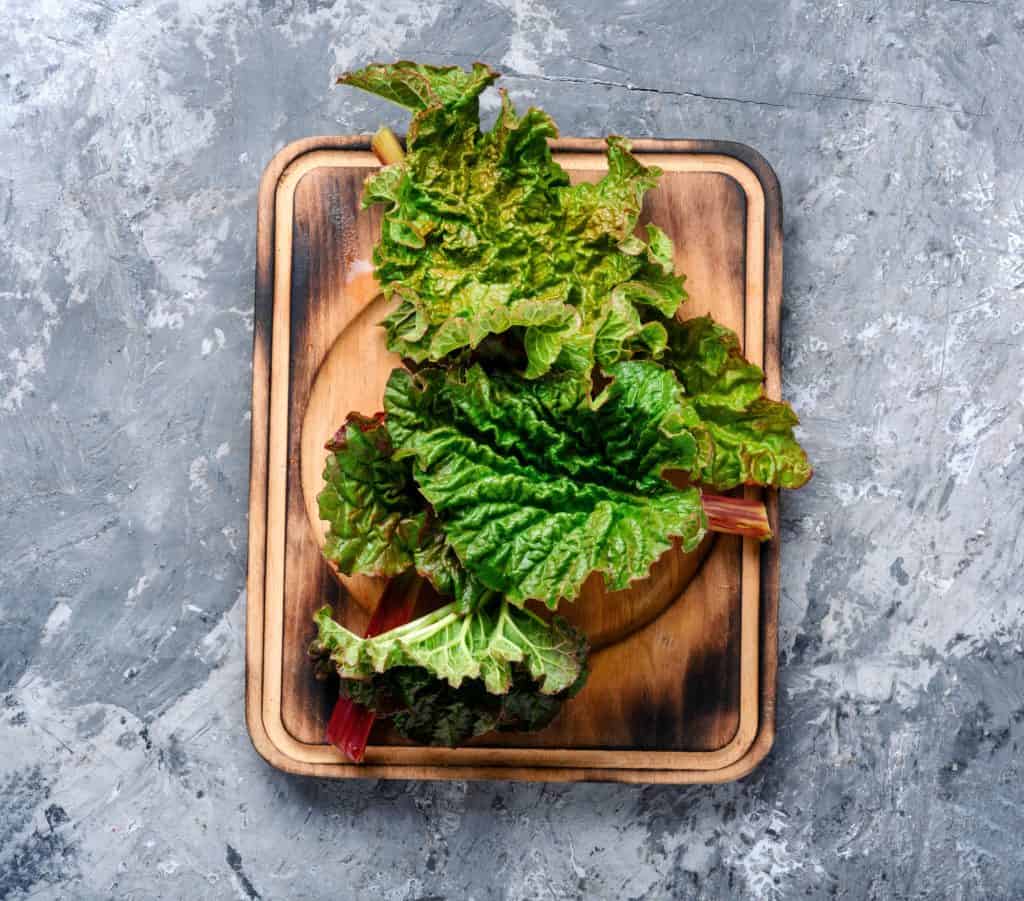 #1. Are Bay Leaves Edible? It’s Tough But You Can Eat It 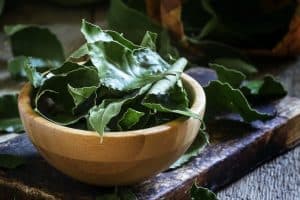 It’s a common myth that bay leaves are toxic when eaten whole and should only be used in their complete form to gently flavor stews and soups. It’s not in the least bit true – you’re more than welcome to chew on a leathery bay leaf if you want to – the worst that will happen is you‘ll choke on it. Not a pleasant experience, but not a fatal one either.

#2. Are Radish Leaves Edible and Good For You? 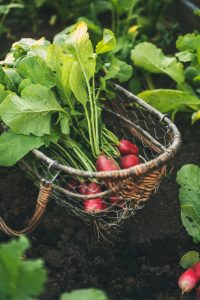 Not only are the greens of your brightly colored radishes edible, they “are strikingly more nutritious than the radish roots”.

Containing more vitamin A, C, and K than the edible roots, radish leaves can also improve gastrointestinal function. Toss them into a salad rather than onto the compost or sauté with a little garlic and oil to bring out their uniquely peppery flavor.

Besides edible vegetable greens, you can look at tree crops too! 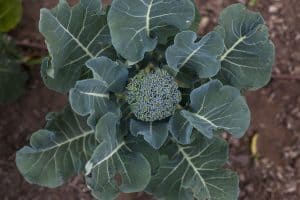 Have you ever asked yourself, “Are broccoli leaves edible?” Well, the answer is a resounding, “Yes!”.

In Italy, a variety of broccoli known as the spigariello has long been grown for its prized leaves. While farmers in other countries have used broccoli leaves “just for cultivating the soil… they are now being recognized for their nutritional power”.

Cook them as you would kale, spinach, or Swiss chard, adding them to salads, soups, sandwiches, and even a nutritious smoothie. 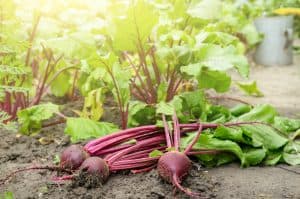 Most of us throw away our beet leaves without realizing what we’re missing. Look at Popeye – he had a great passion for spinach but didn’t even glance at a beet leaf, despite them being even higher in iron, and packed with the nutritional benefits of magnesium, potassium, and vitamins B6 and K.

Steam them, sauté them, or just munch down on them raw.

#5. Are Celery Leaves Edible? Why the Stalk isn’t Necessarily the Best of Celery 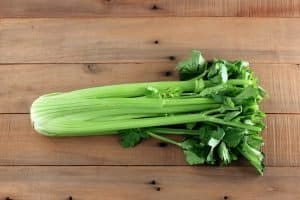 According to the Chinese painter and poet, Yuan Mei, “If one has the art, then a piece of celery… can be made into a marvelous delicacy.”

It’s not all about crunching the stalks either – celery leaves are both “a bonus to their stalks and completely virtuous on their own.” Add a few to boost the flavor of soups and salads, or create a bright and flavourful pesto by pureeing them with a few toasted nuts and a sprinkling of Parmesan cheese.

#6. Are Strawberry Leaves Edible and What Are the Benefits? 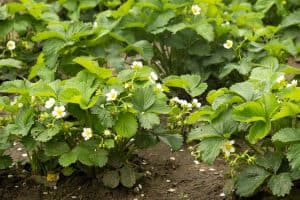 Who doesn’t love strawberries? They’re heart-shaped, vibrant, tasty, and good for your health, but what about the leaves?

Well, they may not be quite as attractive nor as taste-bud tantalizingly tasty, but they are safe to eat and contain numerous beneficial health factors.

The most common way of consuming strawberry leaves is by making a tea out of them, but they can also be used externally as an astringent face wash, helping to “reduce inflammation in and around acne-prone areas”. 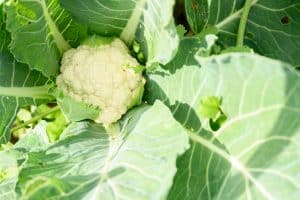 The humble cauliflower is a “versatile vegetable that makes you forget your former comfort foods”, but many of us discard the leaves without giving them a second thought. What a shame that is when you could “let a little oil and a little heat transform the leaves from something you toss to something you crave”.

Transform your cauliflower leaves into a tasty dal or a chutney rich in calcium as well as flavor. Alternatively, roast your leaves in a hot oven and watch as they emerge “crispy at the tips… and buttery along the stalk”. Yum. 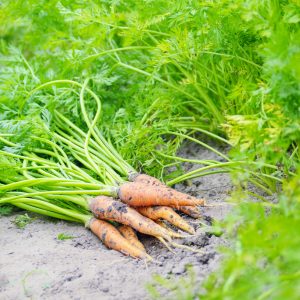 The Thiền Buddhist monk, Thích Nhất Hạnh, believes that “If you truly get in touch with a piece of carrot, you get in touch with the soil, the rain, the sunshine”. That goes for the feathery green carrot tops as much as their orange roots.

Despite the common misconception that carrot leaves are poisonous, they are both “ very edible and loaded with vitamins and minerals”. Although they can be a little bitter, blanching or sautéing them can resolve that problem.

Why not try making a carrot top pesto or a deliciously garlicky carrot leaf chimichurri? Feeling adventurous? Try your hand at this Garlicky Moong-Masoor daal with Carrot Greens. 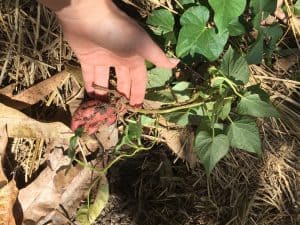 Native to South America, the sweet potato has traveled far and wide and its leaves are almost as popular as the tuber. China is currently “the largest producer of sweet potato” which is also “one of the world’s main crops”.

The leaves are “most popularly eaten in the islands in the Pacific Ocean, Asia, and Africa” while, in the Philippines, sweet potato leaves, or camote tops, “are eaten fresh in salads… [or] cooked in vinegar and soy sauce and served with fried fish”.

Sweet potato leaves aren’t just delicious either – they’re also good for you, giving you the essential nutrients necessary to boost your heart’s health while bringing antioxidant and antibacterial qualities to your diet.

Try eating them raw in a salad, stir-fry them with a bit of garlic, or boil them to reduce their bitterness.

#10. Are Tomato Leaves Edible or Toxic? 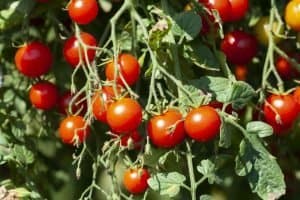 As a part of the Nightshade family, tomatoes are related to notoriously toxic plants like hemlock, foxglove, and oleander. So, are tomato leaves edible? Oddly enough, they are, at least for humans (dogs aren’t quite so resilient).

Tomato leaves do contain tomatine which is a “mild toxin” but “you’d have to eat pounds and pounds of them before you’d get appreciable amounts of toxins to make you ill”. They do mention, however, that “it is likely to cause you some gastrointestinal distress.” This one is to be approached with caution.

With a strong herbal aroma, tomato leaves can be blended into a pesto, chutney, or even a spicy tomato sauce. Not only will you get the pungent flavor, but you may also get some great health benefits.

Recent studies have found that the glycoalkaloid, tomatine, can “effectively kill or suppress the growth of human breast, colon, liver, and stomach cancer cells”. 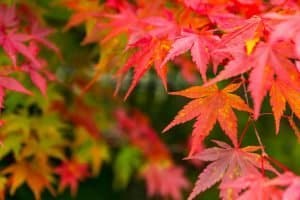 Maple syrup is virtually irresistible but that’s not the only offering these “sociable trees” have to offer. The young spring leaves of the maple tree can be eaten either raw or cooked, with each tree’s leaves providing a slightly different maple flavor.

Although the leaves of the Red Maple are toxic to horses – humans, dogs, and cats can all eat them safely and enjoy some serious health benefits to boot. According to researchers at the URI College of Pharmacy’s Bioactive Botanical Laboratory, maples “have biochemical substances in their leaves, bark, and sap that may counteract inflammation, the root of many of the diseases”.

By regulating blood glucose levels, the maple tree may help people who have diabetes or are pre-diabetic. There are also indications of beneficial effects of maple compounds on Alzheimer’s, possibly by counteracting neuro-inflammation”. You could even make a Maple Leaf cocktail… except that it doesn’t actually contain maple leaves! 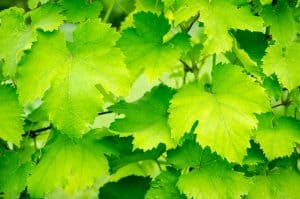 Enjoying a good grape leaf requires two things: first, you need to take a leaf out of Turkey’s book of traditional cooking, then take a small leap of faith, and, next thing you know, you’re sitting down to a classic Turkish tortilla – with grape leaves as the wrapper.

Dolmades, Dolmas, or “grape leaves stuffed with minced lamb and rice” are also popular in Greece, the Middle East, and Turkey. According to some, their popularity began when Alexander the Great besieged Thebes and “was taken aback by the platters of stuffed vine leaves”.

“Stuffed grape leaves are a delicious Mediterranean mezze” and can be stuffed with anything you like – from the traditional minced meat and rice approach to a vegan-friendly alternative packed with herbs, rice, and pine nuts.

#13. Can I Eat the Leaves of a Horseradish Plant? 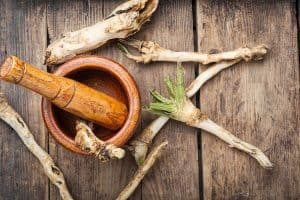 The horseradish is a peculiar plant, “being neither a radish nor a horse”, but that doesn’t make it any less tasty. While too much horseradish is a bad thing – in small amounts, it has a pungent, spicy flavor and provides “a variety of health benefits, such as fighting cancer, infections, and respiratory issues”.

The North Carolina State University warns that horseradish is toxic if eaten in large quantities and may cause “profuse sweating, irritation of the stomach and intestines, loss of strength, disorientation”. In smaller quantities, however, the leaves can be used like turnip or mustard greens, making “a great foil for rich things like smoked meat, especially beef and pork”. 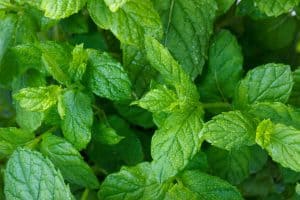 Before today, I had no idea that some wonder, “Are mint leaves edible?”. I’ve been plucking them off the plant outside the kitchen window and nibbling on them for years so I can confirm that I’ve managed that without any horrible side effects.

Although not a lot of research has been done on the benefits of eating mint leaves, there is evidence to suggest that they “can improve oral health, increase exercise performance, combat inflammation and soothe digestive troubles, among other things”.

I love a cup of mint tea before bed and often add a few leaves to my smoothies, salads, and sauces. While spearmint is the variety most commonly used for cooking, orange mint is a great addition to salsa, whereas peppermint comes into its own in sweet desserts like Martha Stewart’s Chocolate Mini Torte. 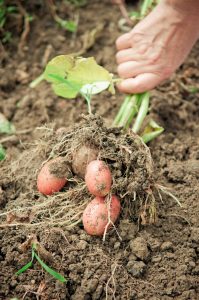 Having discovered that you can eat sweet potato leaves, you might be tempted to try another member of the nightshade family. Don’t do it! Your common or garden variety of potato produces a glycoalkaloid poison known as solanine to protect itself from the sun. Closely related to nicotine, solanine is poisonous, and potentially even fatal.

According to the experts, “symptoms of solanine poisoning vary according to the amount consumed and an individual’s sensitivity to the alkaloid”. The most common symptoms include:

In extreme cases, it can lead to respiratory failure. Take the case of the Chelysheva family in Russia, four members of which suffocated after inhaling the fumes emitted by rotting potatoes in their basement.

Eating your greens isn’t just good for your health – it’s good for the environment too. While many of us worry about climate change, we rarely think about how the food we waste or throw away contributes to that. We toss our carrot tops in the garbage, throw our cauliflower leaves to the pigs, and toss delectable celery leaves on the compost heap.

According to a report by the UK non-profit organization, Waste & Resources Action Programme, “Food waste, around the world globally, causes six times more emissions than air and ground transportation.”

It is time we turned over a new leaf and took a different approach to food, using the “whole ingredient” whenever possible. Turn your carrot leaves into a tasty pesto, your cauliflower leaves into chutney and your grape leaves into delicious dolmades.

Stop tossing out your greens and start tossing them in a vinaigrette instead. Need some inspiration? Take a look at zero waste chef and climate activist, Max La Manna’s book More Plants, Less Waste. More Plants Less Waste: Plant-Based Recipes + Zero Waste Life Hacks with Purpose
$30.00 $18.00
Amazon
We may earn a commission if you make a purchase, at no additional cost to you.