So, you want to learn how to keep rabbits out of the garden? I don’t blame you; they may be cute, but they’ll make short work of your garden. After spending an entire summer carefully looking after my veggie garden, imagine my horror when the local community of floppy-eared rabbits began chomping through my plants.

Are you looking for a cruelty-free way to get rid of these animals? Thankfully, I’ve tried and tested some humane methods to keep rabbits from eating flowers that work. No more bite marks in my prized plants. Read on and I’ll tell you exactly how you can achieve the same success in your garden. 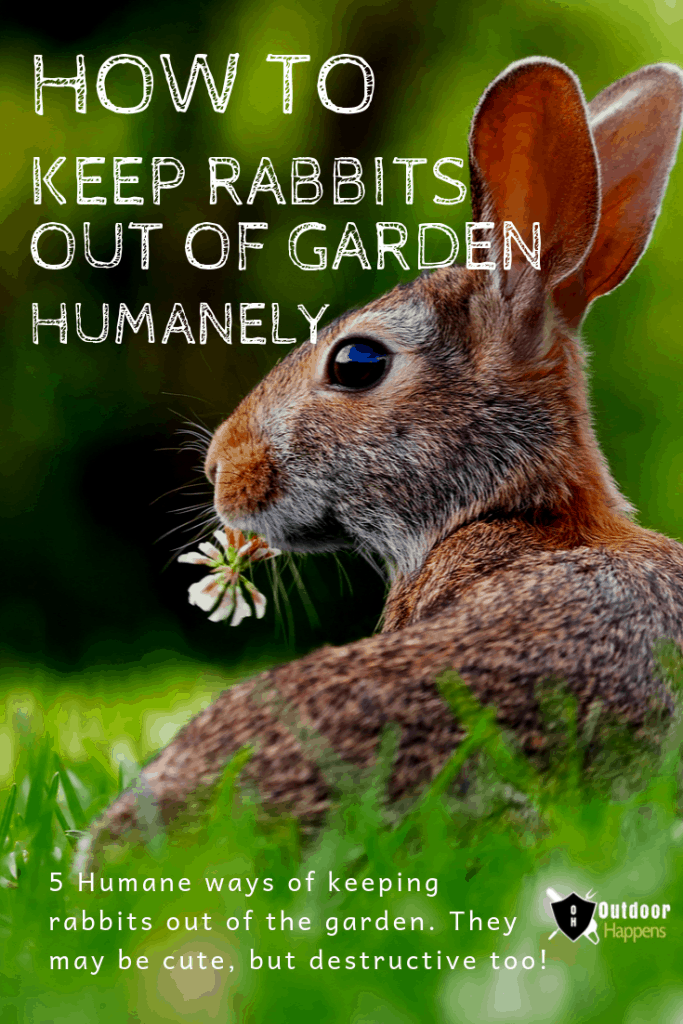 Do You Have Rabbits in the Garden?

There’s no point in implementing any of these solutions if you don’t have a problem in the first place, so examine your garden for any evidence of these animals. One of the first signs is their faeces; rabbit faeces appear as rounded pellets, around 1/4 to 1/2-inch in size. There could also be tufts of rabbit hair caught in tree branches or under bushes.

However, the easiest way to see if you’re overrun with rabbits is to check your plants. These creatures can and will eat almost any tender stemmed plant. In spring, you’ll see damage to grass and other plants, while in fall and winter they’ll pounce on your trees, shredding the bark from the base of the trunk.

What’s more, their favourite foods are the same ones that you love. If you’re trying to kick off a fledgling vegetable patch, the rabbits are going to have a buffet. They’ll happily eat away at any planted vegetables or fruit bushes. Thankfully, there are ways to repeal these animals from your growing plants.

How To Keep Rabbits Out of the Garden

Those rabbits aren’t appearing out of nowhere. Typically, they’ll make their way into your yard from farmland, forested land, or other adjoining public areas. So, if you’re wondering how to keep rabbits out of your garden, one of your first options is to erect fencing. It’s effective, though bear in mind that it’s probably one of the most expensive options for repelling rabbits.

The Royal Horticultural Society suggests a minimum of around 1-1¼-inch wire mesh at a height of 48-54-inches, so that there are no holes to squeeze through. Rabbits are avid tunnelers, so the border should be embedded around a foot beneath the ground and curved outwards. There are also electric fences for rabbits, though they’re less humane, even if the shock is small and not enough to kill.

If you’re less worried about your entire garden and more so about a single plant or area, you can protect individual plants. Just follow the same idea with below-ground netting to guard new trees or flowers. Rabbits love to chew at the base of trees, particularly in winter, so keep them guarded.

If you don’t fancy the idea of fencing around your property or there’s just too much ground to cover, then strategically placing ultrasonic repellents could be perfect for you. When a rabbit passes in front of infrared sensors, the unit emits a high-pitched sound that can’t be heard by human ears. But for these animals, it’s enough to send them scarpering.

This is one option that doesn’t take much upkeep, as most are solar powered and weather-proof. Once staked into the ground, you won’t need to check up on them too frequently. Also, they’ll work against other animals, including large deer, just in case you’re being terrorized by more than just rabbits.

Country Living suggests using some natural repellents to drive those rabbits away with cruelty-free methods. Bone or blood meal works – made from ground animal parts – as does predator urine. This is quite literally the urine of other animals that would sooner chew on your rabbits than your plants. Or you can try some homemade solutions that are sprayed directly onto your shrubs.

If they don’t like the smell of the ground around your plants, then they’re less likely to start munching. But the same applies to taste, which is why you can directly treat the leaves of your plants with solutions that are less than appealing to rabbits. Other treatments with a strong or spicy smell and taste work best against these unwanted critters.

Start with a container of water mixed with dish soap, which helps the repellent to mix and stick to the plants. Add crushed red pepper or hot sauce with some crushed garlic cloves. Then, add the solution to a spray bottle and apply directly to the plants the pests have been feeding on.

Trapping, as the name suggests, involves setting traps around your property to capture those rabbits before they can do any serious damage. Some traps are harmless, while others – like snares – will kill the animal, so choose carefully depending on your intentions.

Probably the most humane rabbit trap consists of a cage or box with a trigger plate, which forces the door closed once a rabbit has entered. Bait should be left inside to attract the rabbit into the box, before the door snaps shut behind them. Then, you’ll want to release the animal at least 5 miles from your property to eliminate the risk of the animal returning later.

A cheaper alternative exists; simply dig a relatively shallow pit on pathways regularly frequented by the critters, before covering it with twigs and leaves. Leave bait on top of the pit to attract the animals; they’ll fall into the hole and be trapped until you can relocate them. It’s thought that rabbits can jump an average of around 2 feet, so make sure it’s deep enough that they can’t escape, yet not so deep it’ll injure them when they fall.

Personally, I like the third option as it’s humane, yet can cost either very little or nothing at all depending on the design. I found this great YouTube video that shows how you can easily build a rabbit trap on your property.

Most small animals are smart enough to NOT enter a yard with dogs, but there have been a couple of casualties, unfortunately. However, this is a chemical-free way of keeping rabbits out, and I’m now rabbit-free in the house yard, at least. The gardens outside of the house yard are still under threat, but I can live with that and hope the birds of prey move in to take care of the rabbits for me.

Depending on wether you want to spend some, a little, or no money at all, you have a whole bunch of options that you can try for how to keep rabbits out of the garden. By far the most successful 4 methods I tried were:

By using the above ways of getting rabbits out of your garden, your plants should recover while leaving you with a clear conscience. And hey, if all else fails, maybe it’s time to consider rearing foxes in your backyard.

Got any questions about the subject? Drop us a comment below and we’ll do our best to answer.