One of the defining features of forest gardens and food forests is how they utilize space to maximum efficiency by growing crops in several “layers” – just as you’d see in natural woodland.

These layers can be roughly divided up into 7:

In this series of articles, I’ll take you through the 7 layers, starting here from the bottom – at the “root” layer.

The Root Layer of a Food Forest 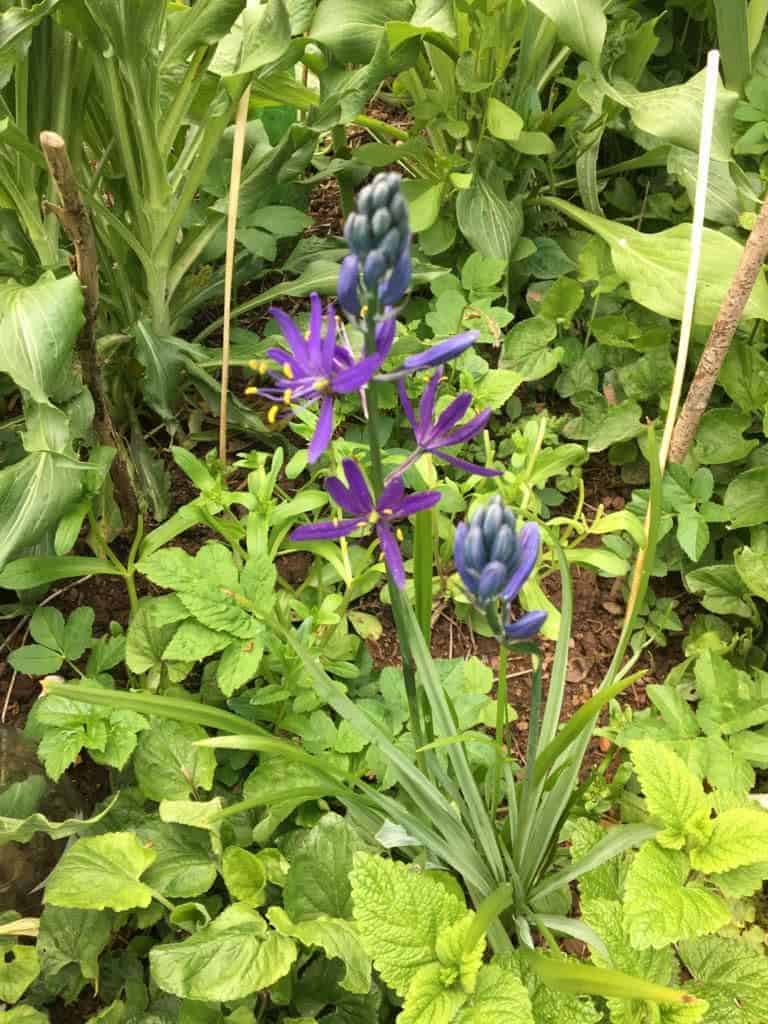 Forest garden root crops might not look like your everyday vegetable! Camassia quamash adds a splash of color to the garden as well as offering up an edible bulb later in its cycle.

Many of the food crops that provide the world’s greatest sustenance come from under the ground: potatoes, carrots, parsnips, onions, garlic, beets, radishes… the list goes on.

In food forests, we can still make the most of roots as a powerhouse of nutrition, especially over the winter months – but our choice of crops will be rather different.

The reason for this is that in the forest garden we focus primarily on perennial crops.

Perennials require less work than annuals – popping up and leafing out year after year without the annual cultivation required in the conventional garden.

They work very well as part of an edible ecosystem because they will grow away happily by themselves with very little interference on our part.

In this system, our main job is to simply plant our crops, watch them grow, and come back later to harvest a portion, whilst leaving the remaining part to grow again.

Tap rooted annual vegetables like carrots and parsnips can be replaced by perennials such as Scorzonera in a food forest. Photo by Michael Becker, CC BY-SA 3.0

Yields of the actual crops might be lower than in the high-input annual garden, but the combined yields in a food forest may be deemed superior when we consider the extra quantities of biomass, topsoil, animal habitats, and the very high quality, nutritional food that results from a diverse ecosystem.

Besides – our inputs of time, energy, and fertilizers are vastly reduced, and forest gardens are just great fun to work in. 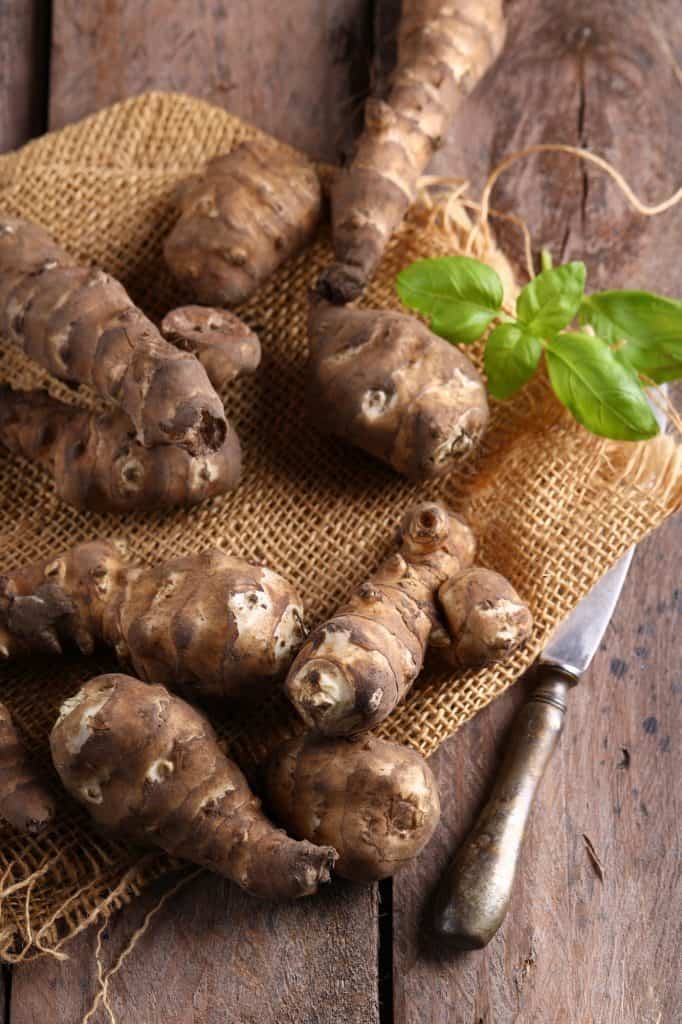 A few of the examples we mentioned earlier can be grown as perennials, as long as some of the root material is replanted at every harvest to regrow again.

Potatoes, shallots, and garlic are all in fact perennial plants and healthy specimens can be left to grow back year after year – providing we don’t harvest everything!

Yet one of the most exciting things about food forests is how they open up opportunities for us to grow so many more kinds of crops than would normally be attempted in the vegetable garden.

These are some of my very favorite of all forest garden crops. Many of them also have edible leaves and the excitement of digging down to discover their bounty is a yearly treat. 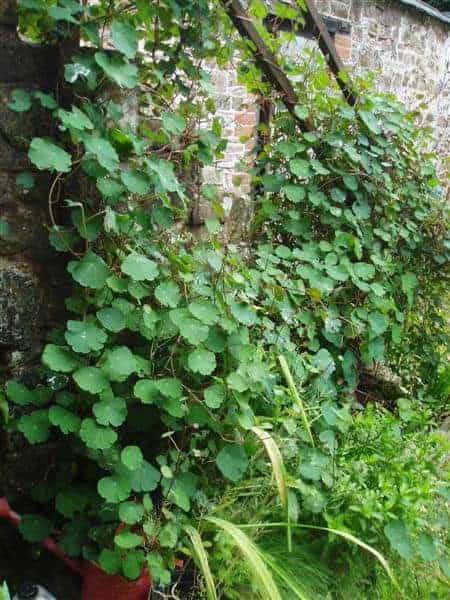 My Mashua vine running rampant, just outside my back door, in Devon, UK.

Potatoes, Jerusalem Artichokes, Yacon, Oca, and Mashua are all examples of tuber crops, which are strictly speaking not roots, but underground storage organs of the plant.

Mashua is one of my all-time favorite perennial vegetables. It ticks all the boxes for me: It is a plant of real elegance and character, with a strong determination to grow. A friend of mine was even suppressing brambles successfully by letting Mashua clamber over them!

It has delicious edible leaves that can be added to salads throughout the growing season, and its roots have a flavor like no other. A mixture of vanilla, mustard, and Jerusalem artichoke – they really need to be tried to be understood!

Oca is another South American tuber crop that is fast growing in popularity around the world for its lemony-tasting little tubers. It also has edible leaves – although eating too much of either root or leaf is not advised owing to the high content of oxalic acid that this plant contains. Easily grown and hardy under a straw mulch down to around 14F. 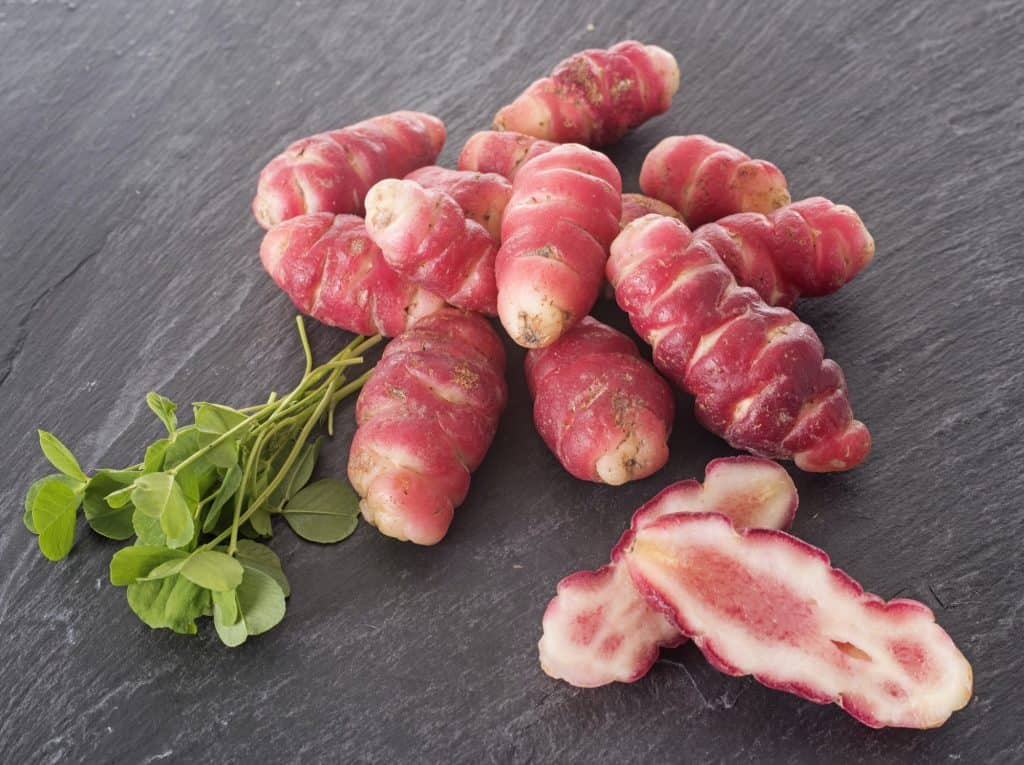 Oca is part of the oxalis family – its characteristic three leaves are shared by other members of the family such as wood sorrel.

Yacon – also from the Andes – is unique in that it almost tastes more like a fruit than a root! Juicy and crunchy when raw, it contains a form of sugar called inulin which is becoming popular with those on weight loss programs.

The human body can’t properly digest inulin so it’s a good way to enjoy a sweet treat without in-taking many calories! Yacon is a little more tender than the other species mentioned but should survive under a thick straw mulch up to 22F or so.

Yacon is a cousin of the sunflower and Jerusalem artichokes (shown above), hence the similar flower. Image by Farmcore, CC BY-SA 3.0

Most tuber crops tend to do best when you give them adequate space, so plant them at a minimum spacing of 40cm and harvest all but one strong tuber from each specimen to help keep yields high.

Perennial members of the Allium family such as shallots, wild garlic, and Welsh onions are some of the better known edible bulb species. Yet, lesser-known species can also be fun to try. There are hundreds of perennial Alliums out there, and many of them are very decorative too. 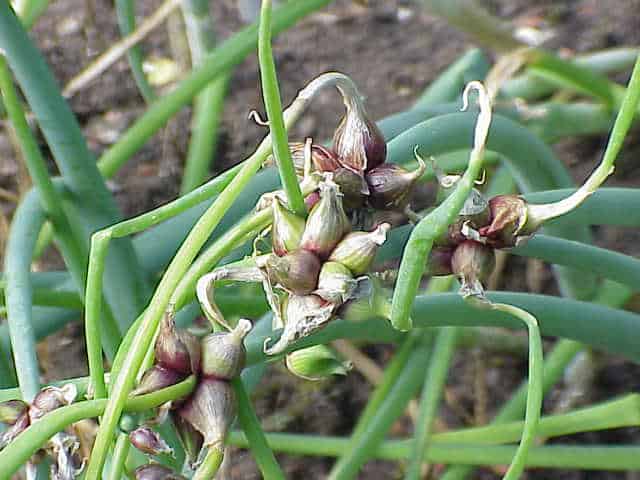 The Egyptian walking onion is a fascinating member of the Allium tribe. It produces little bulbs in the air as well as in the ground. Photo by Kurt Stüber [1], CC BY-SA 3.0, via Wikimedia Commons

Camassia is an interesting genus of bulb-forming plants hailing from North America. They can quickly spread to form carpets in damp grassland (or a sunny, moist part of the forest garden) and were used by the Native Americans as a substantial food source at certain times of the year.

In their native habitat, Camassia can cover huge swathes of prairie land.

Another decorative genus is Erythrothium – which includes the Dog Tooth Violets. These are perfect shade-loving perennials for the forest garden with edible bulbs.

Erythronium Japonica is a delightful member of the Erythroniums. The bulb is still used in Japan to make a starchy sauce known as ‘katakuri-ko’.

One last family of bulbs that can be utilized successfully in the food forest is the Ornithogalum tribe – which includes “Star of Bethlehem” and “Bath Asparagus”. Whilst members of this genus shouldn’t be eaten in great quantity, they do make a very pretty addition and are easy to grow.

Star of Bethlehem makes a cheerful addition to the forest garden floor. Its edible bulb is a great bonus!

Bulb-forming plants are among the easiest to grow but keep a careful eye on those with a spreading habit – some species can run rampant where they’re happy!

We’ll lump these last two categories together as true rhizomatous crops are seldom seen in the temperate forest garden.

One of the few examples is Valerian (Valeriana Officinalis). Whilst not edible, Valerian rhizomes are a much sought-after medicinal crop. Calmative, nervine, and tranquilizer, Valerian is used as a powerful treatment for all kinds of nervous complaints such as anxiety, stress, and sleeping difficulties. 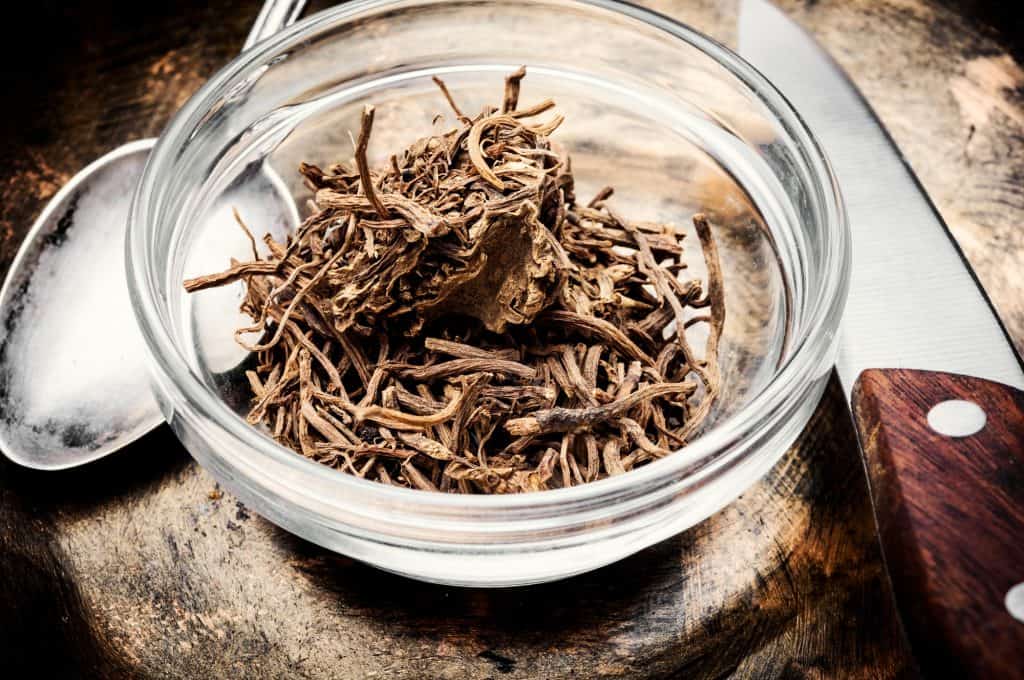 Dried Valerian root can be brewed into a tea or made into a tincture to bring relief to the entire nervous system.

Tap rooted plants such as Yams, Salsify, and Scorzonera will give you a much better return when planted in the sunniest, fertile reaches of your forest garden. With these, it may be best to let them establish for a couple of years before taking the first harvests, ensuring there is plenty of material to replant again.

Skirret (Sium sisarum) is actually a bit of an anomaly since its cluster of plump tap roots could just as easily be defined as tubers. They are easy to grow in moist, rich soil and give a good return after a couple of years. One of my clients described the taste as “a cross between carrots and parsnips, but better than either of those.” 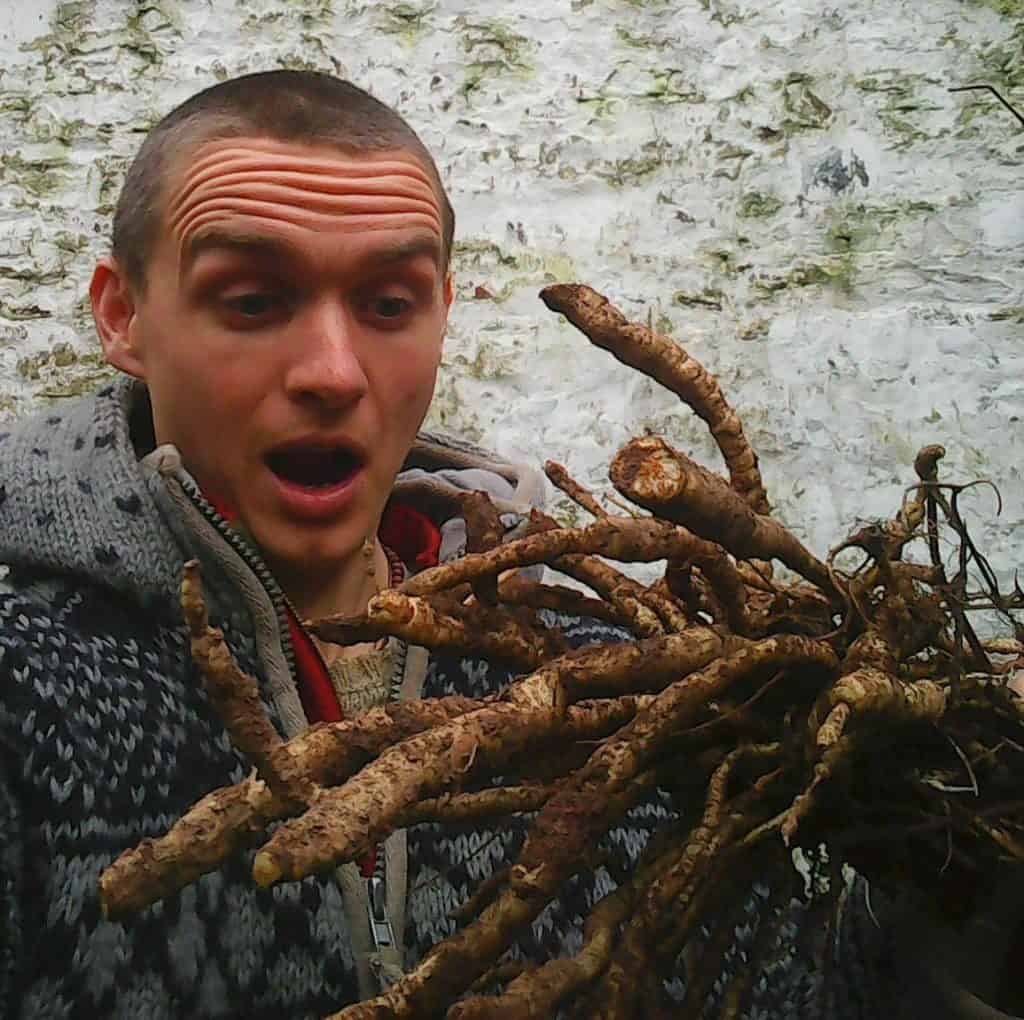 I was astonished by the freaky appearance of my first ever Skirret roots!

The Chinese Yam (Dioscorea batatas) is one of several species of yam to grow well in a warm-temperate climate. Yams are beautiful climbers that will amble their way up and over anything that stands in the way of them getting the direct sunlight that they love.

This species is sometimes also known as the “Cinnamon Vine” because of its aromatic flowers. I’ve found the root of this yam to taste much like a potato, but with far superior nutritional and medicinal properties. It is lovely fried, baked, mashed, or simply boiled. 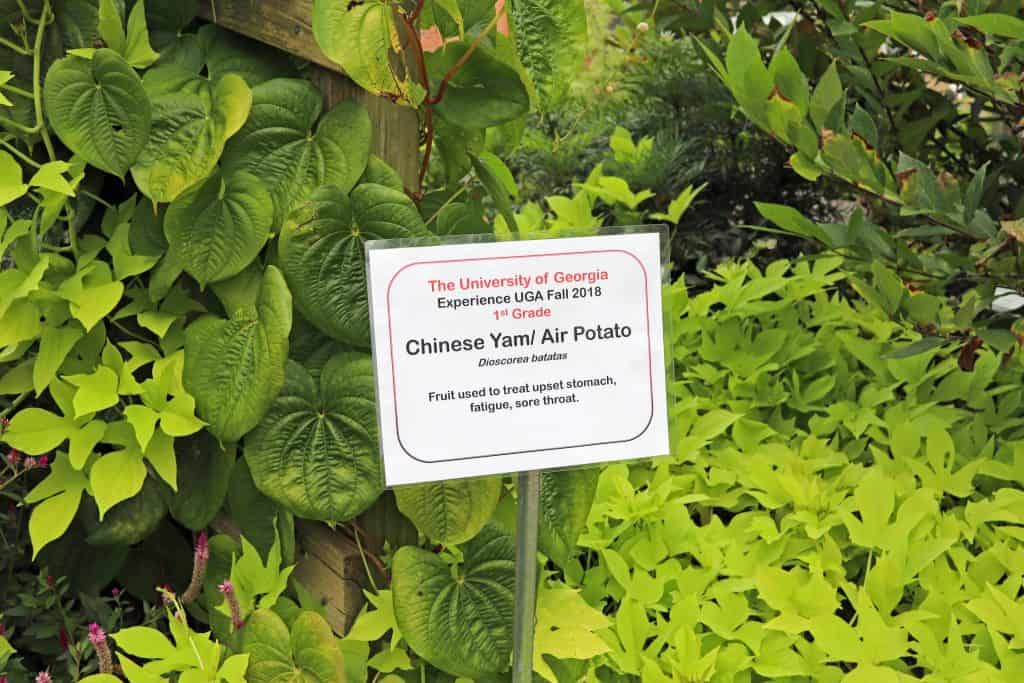 Chinese Yams are incredibly popular in Asia. If you’re lucky you might even find them at your local Oriental Supermarket! Chinese yam – air-potato – dioscorea polystachya IMG 7485.jpg by Don McCulley is licensed with CC BY-SA 4.0.

Salsify and Scorzonera are often confused since they are so similar to grow and eat.

The roots of both plants have a sweet, nutty flavor and grow best in light, sandy soils with plenty of organic matter. Both of these species have edible leaves and flowers, and to my nose, the yellow flowers of Scorzonera remind me irresistibly of Aero chocolate bars! Judge for yourself… 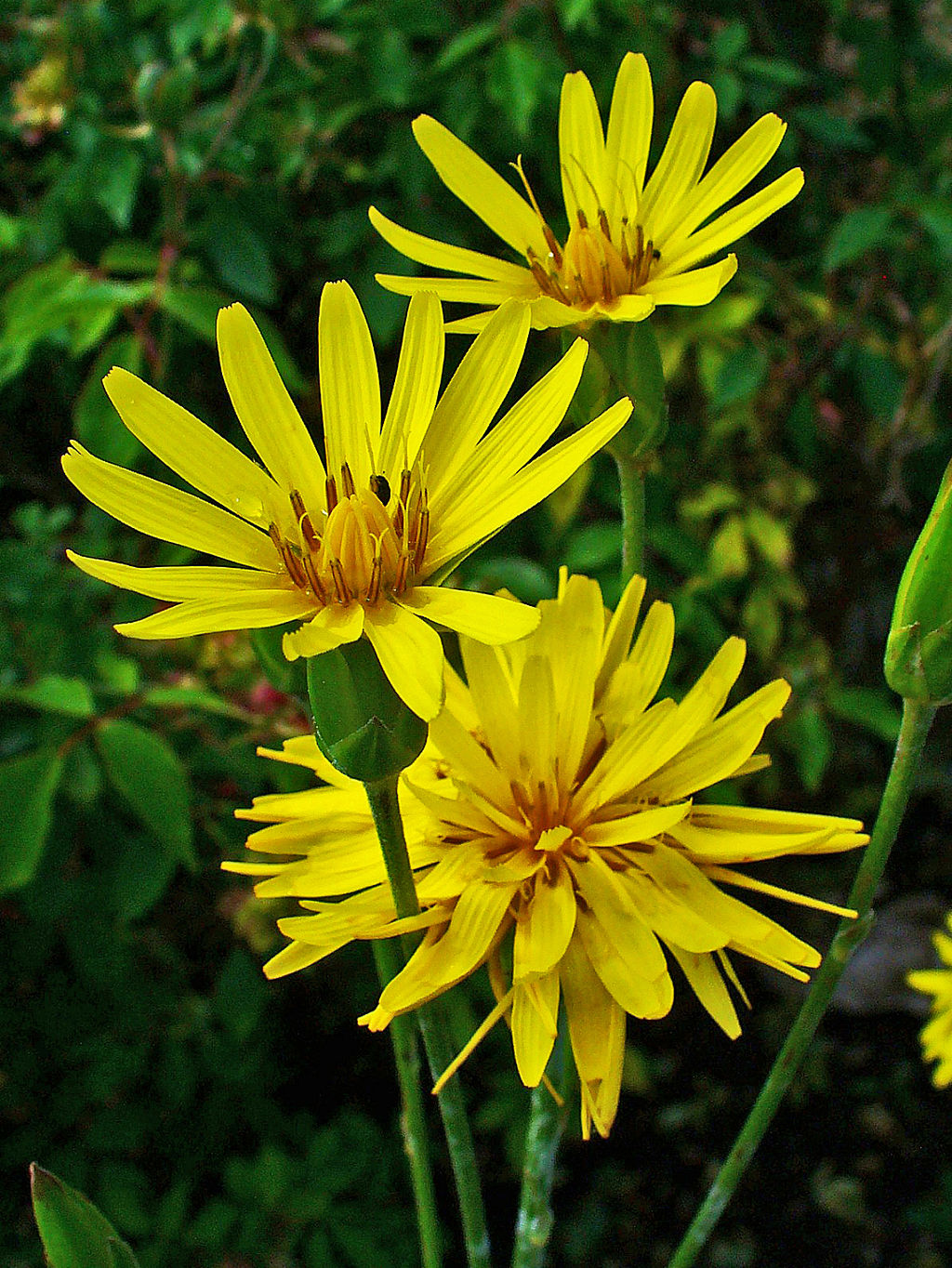 The scent of Scorzonera flowers remind me of chocolate, so it’s lucky you can eat them! Mm-mmm!

Most tap-rooted crops can be multiplied by slicing them up the root into 2-inch lengths which will eventually grow new buds to spring forth again. These sprouted roots can be replanted directly or grown on in a pot to give them extra strength first.

Designing the Root Layer In Your Food Forest

I always tell my clients: The first thing to think about when planning any part of a food forest garden is to think about what you want out of it! If you’re not much interested in root crops, don’t feel obliged to plant them just because everyone else is!

Yet, for most people, a healthy smattering of root crops in the mix is a real boon on the food forest garden menu. Roots are available over a long period when the rest of your living larder might be literally thin on the ground, and they’re a powerhouse of nutrition that’ll keep you going when everything else is sleeping.

My Mashua tubers can stay fresh from autumn until spring, filling in that hungry gap very nicely!

It’s easy to forget during the greener months of those long, sleepy winter months when fresh produce is such a treat. With careful planning, we can spread out our food forest garden produce to feed us the entire year – and a good tip for over-wintering in abundance is plenty of roots!

I’d recommend planting most of your root crops in designated areas of the forest garden where there’s a high degree of fertility, and lots of sunlight can get in.

You can improve soil fertility by planting nitrogen-fixing plants such as clovers and lupins nearby. White clover might even work as a living mulch for some of these species to grow through, whilst others, such as the greedy yacon, may benefit from a straw mulch so it can feast on all the surrounding soil nutrients itself. 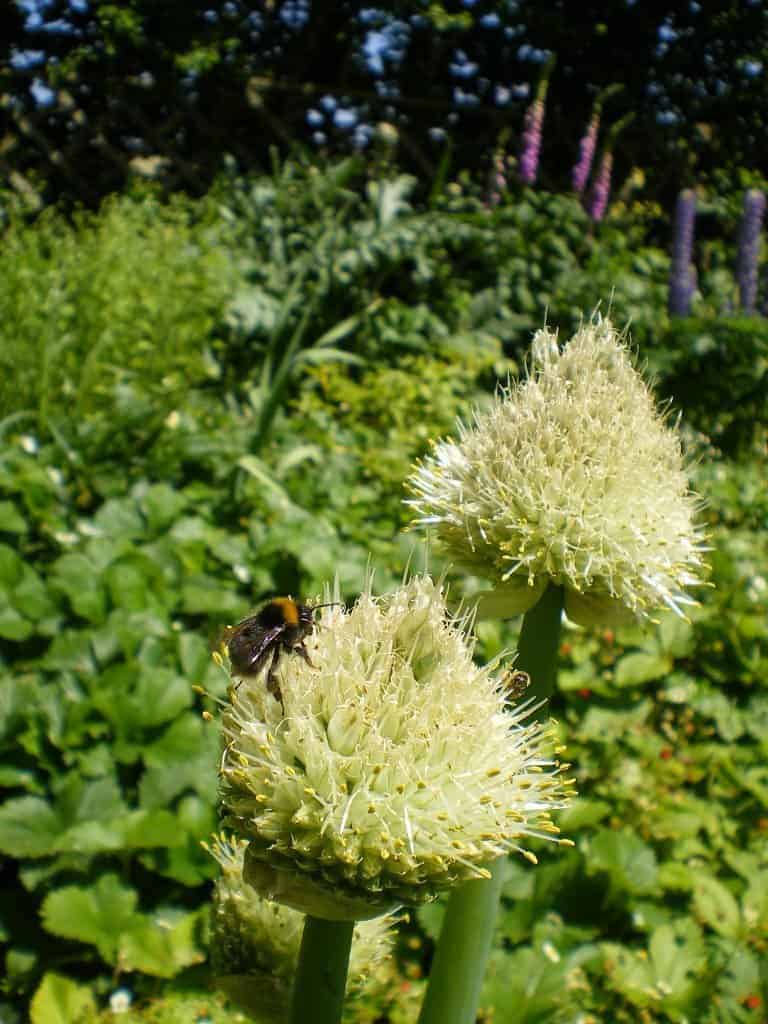 Alliums such as Welsh Onion do very well growing through a low growing ground cover such as wild strawberries. The flowers are a hit with the bees too!

Whilst a few of the bulb species are happiest in a shady spot, for most root crops I’d recommend a clearing in the canopy where your plants will receive at least half a day of direct sun to optimize yields.

I hope this article has inspired you to experiment with some of these root crops in your own garden. Even if you only have a small backyard to play in, most of these crops would still be highly suitable, and great fun too.