I found a duck egg this morning after several months of watching our 12 Indian runner ducks scoffing down food without giving us anything in exchange.

It made me wonder what makes them stop laying and, more importantly, why, on a cold and wet autumnal day, they suddenly decided to start again.

So, When Do Ducks Start Laying Eggs?

Our ducks started laying about 18 months ago, when they were around six to seven months old, which is standard for most duck breeds.

As they are very flighty birds, I didn’t check to see whether their pelvic bones had spread and become more flexible in preparation for laying, but that is something you could try if you think your ducks are nearing maturity.

On a mature female duck, the space between the pelvic bones will increase from a two-finger width, so you should be able to fit four fingers between them instead.

Regardless of what breed your backyard ducks are, they’re unlikely to lay their first eggs if they mature during fall or winter.

Instead, they’ll wait until spring when there are more hours of light per day and the mating season begins.

Do Ducks Lay Eggs All Year Round? 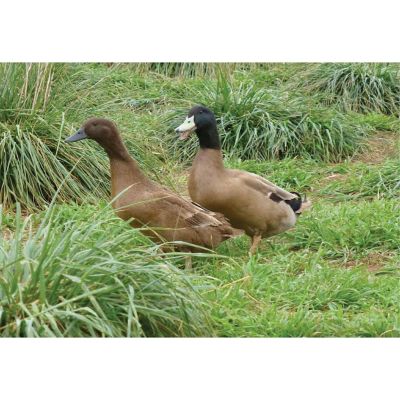 Like your backyard chickens, most breeds of ducks slow down during the winter months, producing fewer eggs as the number of daylight hours reduces.

Some breeds, like the Khaki Campbell, keep laying throughout the year, while the Mallard and Indian Runner will at least reduce their egg production during the cold months, if not stop altogether. (Here’s where to buy Mallard ducks and Runners.)

Similarly, most duck breeds will be less productive when molting as well.

Raising adult ducks in areas or duck houses that are too small can cause stress which will “will hamper a duck’s laying ability severely.”

Poor hygiene, over-feeding, bullying within the flock, and limited access to water can also impair her ability to lay.

Read more in our Guide to Raising Ducks for Beginners!

How To Get Your Ducks To Lay More Eggs 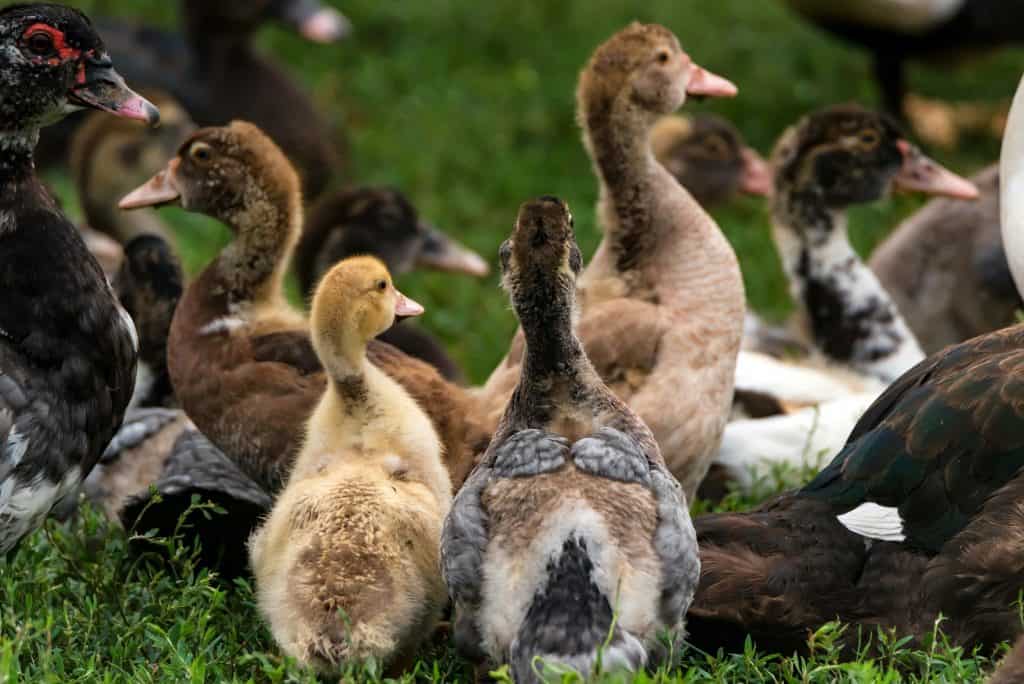 Once your female ducks have reached sexual maturity, you can increase egg production “by giving them 14 hours of light daily,” this may mean introducing artificial lighting (Amazon) to your duck pen during winter.

A balanced diet will also boost your ducks’ ability to lay.

A well-balanced duck layer feed or standard duck pellets that contain the necessary vitamins, minerals, and all-important niacin, is your best bet, although supplements like Brewer’s Yeast and oyster shell can be similarly effective.

Read more – The Pros and Cons of Raising Backyard Ducks

Environmental factors also impact egg production so having a serviceable duck house is vital, as is giving ducks the freedom to forage and easy access to drinking water.

A duck that doesn’t exercise and has constant access to food will become obese, and ducks with excess body weight don’t lay eggs.

Depending on the duck breed you’ve opted for, you can expect anywhere between 60 and 290 eggs per bird per year, with Mallard Ducks producing the least and the White Layer Duck the most. 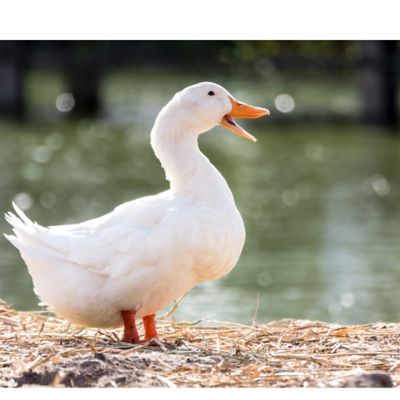 How Do Duck Eggs Differ From Chicken Eggs?

Not only do my Indian Runner ducks lay eggs that are around 30% larger than a chicken’s, but they also come in a variety of pretty pastel shades, ranging from pale green to almost powder blue.

Appearance is only one aspect, though, and many of us duck fanatics have asked ourselves and our backyard flock, “Which is healthier – chicken or duck eggs?”

Although duck eggs have higher fat content and “contain more cholesterol and calories than chicken eggs,” these negatives are offset by their higher nutritional value.

Richer in vitamins and nutrients, duck eggs contain higher amounts of iron, vitamin B12, and folate than chicken eggs do.

Another benefit is that, with their thick shells and glutinous membranes, duck eggs are less fragile than chickens’ and keep longer as a result.

An omelet made from duck eggs always seems that bit richer and just a little “eggier” than one made from chicken eggs.

I have noticed, however, that duck egg whites don’t whip up the same as chicken eggs do, which means they don’t work so well in meringue or souffle.

They are, however, highly prized by pastry chefs who appreciate the richness they bring to cakes and other desserts.

What If I Want Ducklings Instead of Eggs?

You might decide to try breeding ducks rather than just eating their eggs, but how successful this will be will largely depend on the breed.

Runner ducks are notoriously bad parents, rarely getting broody and, even when they are, they’re “just too air-headed to be good moms.” 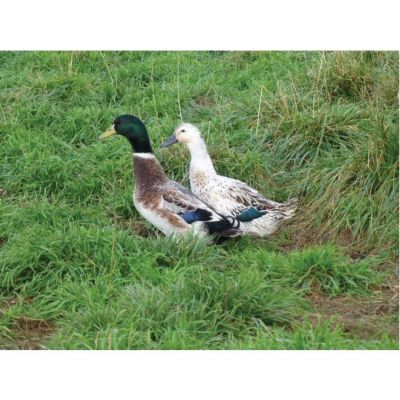 Besides breed, management is key, particularly in terms of your drake-to-duck ratio.

Too many males can turn the breeding season into a violent free-for-all, so aiming for around one drake to every six female ducks is recommended, although a vital Khaki Campbell can manage as many as 10 without breaking a sweat!

Most duck breeds prefer to nest near water and, unlike chickens, will lay pretty much anywhere other than a nest box.

Both wild and domestic breeds will make a nest on the ground, usually in a natural hole or somewhere that’s covered with natural vegetation.

The mother duck will often pluck out her own feathers to line the nest, giving her eggs an extra layer of insulation.

If you want to make her life a bit easier, you could construct some straw-lined nesting boxes close to a convenient water source to give her a headstart in the nesting process.

Not only do these provide a safe environment for broody ducks, but they also improve the quality of the eggs. Eggs that are laid on the floor “higher bacterial counts… [and] more cracks and breaks,” which leads to lower hatchability.

If you plan on incubating the eggs, experts recommend waiting approximately two weeks between breeding and egg collection as this gives your females “the opportunity to sit on their eggs, which increases the fertility rate.”

The incubation period for duck eggs ranges from around 28 days for the Pekin to approximately 35 days for larger breeds like the Muscovy.

So are ducks or chickens better if you’re looking for a backyard flock?

It depends on what you want them for and what environment you have to offer them.

We have both and value the chickens’ ability to control the fly population and clean up after other animals while giving us a consistent supply of eggs.

Our runner ducks, on the other hand, were never purchased for their eggs but rather for their foraging abilities.

Our ducks roam through the vegetable garden, hoovering up slugs, snails, and other pests while largely ignoring the temptations of the juicy greens growing around them.

Having said that, there’s nothing quite as special as finding a duck egg that’s been hidden in the garden – possibly because it takes a dedicated treasure hunt to track the damn thing down!

If you opt for one of the best laying breeds, like the Khaki Campbell, for example, you can expect around 165 to 240 eggs per year from each female duck, which is on par with the best chicken layer breeds.

Given that duck eggs are, on average, 30% bigger than a chicken’s, that means you’re getting more omelets, quiches, and cakes from each Khaki Campbell than you would from, say the Rhode Island Red.

Although a Rhode Island hen lays up to 300 per year, the smaller size equates to a lower yield overall.

Before Putting All Your Eggs in One Basket…

Some breeds of duck, including the Indian runner and the Khaki Campbell, start laying eggs as early as four months old, but most will start laying regularly once they reach sexual maturity at 6 to 7 months of age.

The best laying breeds produce up to 290 eggs per year, which is equivalent to approximately 380 chicken eggs, making White Layer and Hybrid Layer ducks more productive than the best chicken layer breeds.

Although duck eggs are higher in both calories and cholesterol than chicken eggs, they’re also more nutritious, so if you’re looking for a backyard flock to supplement your diet, ducks are an excellent choice.

It’s worth bearing in mind, however, that not everyone likes duck eggs, so you should probably do a taste test before putting all your eggs into one basket and purchasing a flock of Muscovies instead of Rhode Island Reds.